The Top 10 Best Ending Songs Of All Time

Well, I wasn’t able to see Contagion today, so here’s another Top 10 List!!

You know that moment in an awesome movie when the movie ends, and just when you think it couldn’t be more awesome, a kick-ass song that fits perfectly begins to play and makes you love it even more? This list is in honor of that moment.

Today, we look at the top 10 best movie ending songs of all time, not just because they’re awesome songs, but because of how well they complement their respective movies. Enjoy.

WARNING: Some Spoilers Abound In Some Of Them
—

The reason why this isn’t higher on the list is, to be perfectly honest, I’m not a big fan of this song, or this type of song in general. However, I can’t deny how effective it was when it played at the end of Darren Aronofsky’s fantastic The Wrestler. The lyrics themselves are wonderfully written, and are able to spell out the main themes of the film without feeling corny…that is, it doesn’t feel corny until they come out of Bruce Springsteen’s mouth. Still though, while it doesn’t really hold up on its own (to me anyways), it works really well when complemented with Aronofsky’s heart-breaking ending.

I really don’t even need to explain this one. It’s too iconic for an explanation. It’s been parodied in countless films, like The Puffy Chair and Easy A, but it still retains its universal charm. A testament to the fact that this scene still works to this day.

Two charming romantic comedies, each one ending on a sweet note accompanied by a sweet song. Garden State‘s ending feels surprisingly effective as Let Go begins to play while the camera walks back from the kissing Zach Braff and Natalie Portman. And while (500) Days of Summer‘s ending is a bit on the “winky-winky” side of things, the burn is healed by She’s Got You High playing over the credits.

Sigur Ros makes some of the most strangely transcendant and life-affirming music today, making it a perfect fit for Danny Boyle’s transcendant, inspirational, and life-affirming survival film 127 Hours. It isn’t too much of a spoiler to say that Aron Ralston, after being trapped in a crevice for 127 Hours, ends up cutting his arm off as a means to survival, but as intense as the scene is, Boyle knows that it isn’t meant to be disturbing. In the end, Ralston’s will to live saved his life, and also, made it better as a whole, which Festival’s rising build helps accentuate.

#6: Rage Against The Machine’s Wake Up from The Matrix (The Wachowski Brothers, 1999)

The Matrix isn’t just a surprisingly philosophical sci-fi film, but a badass actioner with revolutionary stunts and action sequences. So what better way to close a badass action movie than with a badass song by badass band Rage Against the Machine. Say what you will about Keanu Reeve’s acting, but he delivered the final lines of the film in a way that was…er…badass, and the second Rage Against The Machine begins booming from the speakers, you just feel badass for watching the thing.

#5: Simple Minds’ Don’t You Forget About Me from The Breakfast Club (John Hughes, 1985)

Y’know how every ’80s movie had to end with a ridiculously ’80s song. John Hughes’ teen classic The Breakfast Club, is the grand-daddy of that trend, and one of the only times that it still holds up to this day. After a long day of detention, mischief, mayhem, and the revealing of emotional scars, these five teens gain an unforgettable experience that will stick with them for the rest of their lives. Many people still haven’t forgotten this movie more than 25 years later, meaning that the song by the Simple Minds that plays at the end was more fitting than we’d thought. Throw that fist in the air, Mr. Nelson .

Blue Valentine is not an enjoyable film to sit through. As far as movies go that are really, really good, but also really, really difficult to endure, Derek Cianfrance’s directorial debut sits up there with Requiem for a Dream and Irreversible (Even though it isn’t nearly as shocking as either of those, it’s still just as powerful). And it isn’t really much of a spoiler to say that things do not end well for the main couple of the film played exceptionally by Ryan Gosling and Michelle Williams. However, a small but still powerful ray of hope emerges when the ending song by Grizzly Bear kicks in, and boy is it powerful. With a beautifully understated final shot, the song is set to the crackle and pop of Independence Day fireworks, which are then accompanied by snapshots of the couple’s happier times in the credits. It’s a beautiful ending that softens the blow of a heart-breaking film.

#3: The Jesus And Mary Chain’s Just Like Honey from Lost In Translation (Sofia Coppola, 2004) 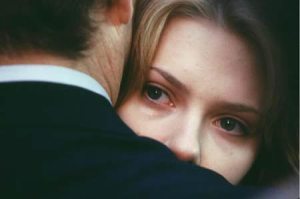 Sofia Coppola is known for her gentle touch and subtle understatement, but uses that to provoke big emotions from the viewer. Her masterpiece, unanimously chosen so by critics and movie-buffs, is Lost In Translation, which has become infamous for it’s ending scene in which Bill Murray whispers something in Scarlett Johanneson’s ear and the audience doesn’t even hear a word of it, leaving it all open to interpretation. While we may never know what exactly is said to Johanneson while Murray gives his final goodbye, the accompanying song by The Jesus And Mary Chain lets you know that whatever it was, it meant a lot to the two of them. It’s a beautiful song that softens the blow of the ending’s poignant (but frustrating, for some people) ambiguity.

Richard Kelly may have gone as downhill as you can get for a once-promising new director, but his debut feature is still a deserved cult-classic. While I’m not as big a fan of the film as others are, I will never forget the haunting ending to Darko. Yes, it’s confusing and I didn’t really get it as much as I should’ve in my first viewing, but that was assuaged by the fact that Kelly takes a twist that could’ve just been used to shock or confuse the audience, and instead focuses on the emotiona and humanity of the situation. And the song fits that perfectly. Seeing Darko and all the lives he’s saved/touched while the haunting lyrics of Mad World echo in the distance is a powerful moment that has stuck with many viewers for 10 years. If only Kelly made a movie today that was as good as this was.

Oh shut up, you all saw this coming a mile away.

There are honestly no words to describe how perfect this ending is. With Tyler Durden now defeated and the Narrator free of his influence, all he could do is just watch as Tyler’s product of anarchy lets itself loose into the world. How do you soften the burn of realizing your best friend was insane and ready to blow up every city’s huge banking building? Simple: Holding hands with your girlfriend whilst The Pixies plays in the background.

An evocative mixture of film and music that always gives me the chills when I see it, this film greeted me in a very strange time in my life.

See ya next time. Now if you’ll excuse me, here’s a funny little poster. Bye!