On the first Recent Movie Round-Up of the New Year we have: Robin Williams goes to heaven, little kids fighting the forces of the undead, the French Die Hard, a classic epic, and the most mysterious musical figure of our time. Kinda. MOVIES AHOY!

When I originally saw this film years ago, I was awed by its gorgeous, breathtaking visuals depicting Heaven and Hell. A couple years or so later, I read the book it was based on, by Richard Matheson, and was moved by its wonderful prose and gorgeous emotion. Earlier, the film was on cable and I decided to give it a rewatch. I remembered liking it, so why not. Little did I realize that there was one thing I didn’t notice when I first saw this film: The horrendous script. It was shocking to me how it was blocked from my mind, but this is a very poorly written film. Weird character twists, meandering pacing, and shockingly awful uses of flashbacks that break up the flow of numerous scenes. And what’s worse is that a majority of the dialogue is exposition, something that worked in the novel but is poorly translated on screen.

A shame because director Vincent Ward’s visual eye is astounding, and perfectly captures the beauty of Matheson’s original prose in increasingly inventive ways. He isn’t to blame for the film’s faults, for he tries so very hard. Instead it is screenwriter Ronald Bass (Who previously wrote Rain Man, a good film, and then lesser films such as The Joy Luck Club and Amelia), who can’t keep a sense of flow in this story and taints the original story with odd character twists that make no sense. Should be seen only as a visual experience.

I already reviewed and praised this film enough so I won’t spend too much time on it. But one thing that doesn’t get nearly enough credit is just how smart the script to Paranorman is. Like Looper and Cloud Atlas, two of the other great films of 2012, Paranorman imbues almost every single plot point with theme, making everything important to the character arcs and the overarching message. This is a rare film about anti-bullying that’s surprisingly very two-sided, showcasing how abuse can damage youths, while also acknowledging that punishing those very bullies doesn’t make things any better. Either way, this is a terrific film that more people need to watch. The climax of the film is deeply moving.

Coined as the “French Die Hard“, Sleepless Night is a relentless, frenetic cat-and-mouse thriller that takes place almost entirely in one location, and makes great use of it too. Following a somewhat crooked cop who has to save his son from druglords, Vincent (Played by the wonderfully intense Tomer Sisley) will stop at nothing to save him. Sleepless Night doesn’t break new ground in the action thriller genre, but Jesus H. Christ does it to a damn good job of executing it.

Director Frederic Jardin hits the ground running and doesn’t slow down, even for a second, continually gaining momentum and always providing something interesting. The characters are all fairly well-drawn, enough to the point that you can distinguish each one’s motivations and backstories, which leads to some cool “reversals” when we learn that Vincent may not be the only cop with a secret. The action sequences manage to balance that line of being shot in a chaotic shaky cam while still being edited well-enough to create comprehensible fight sequences. It’s astonishing to me that this film makes for a better Taken sequel than the actual Taken sequel we got last year.

Simply put: Anyone who just wants a very, very solid action thriller needs to seek this baby out. 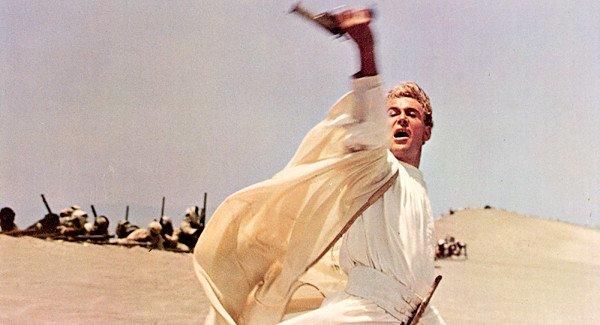 Yup, this was my first time seeing this movie. Yeah, go ahead and bite me, I guess. I thought I knew what to expect going into it: A huge, desert war epic about T.E. Lawrence’s escapades in Arabia during WWI. What I wasn’t expecting was one of the most fascinating character studies ever put to film, with one of the most nuanced performances I’ve ever seen in my entire life. Peter O’Toole and director David Leane takes the typical war epic and turn it into something more: A portrait of a man in crisis; of identity, sexuality, importance, belonging, etc.

Simply put, it lived up to its reputation, and more. And seeing it on a large monitor with 4k resolution was an astounding thing to behold.

Searching for Sugar Man is a documentary that starts out with this simple premise: A musician named Rodriguez made two albums. They were beloved by all the recording studios and music executives across the industry, but it sold squat in America. However, what people didn’t know was that they were gangbusters in South Africa, and Rodriguez was more popular than Elvis in that part of the world. So why isn’t this man a superstar? Because it is believed that he committed suicide on stage in a bad concert.

It starts like that, and then…becomes something more. I dare not say what it is, but let it be known that not since Dear Zachary has a documentary moved me to tears the same way that this one did. Searching for Sugar Man is an incredible, profoundly beautiful experience about the enduring power of art and music that should be experienced by everybody. Fascinating, heart-breaking, and poetic beyond belief. Seek this baby out.